What is Unistrut – How is it Used for Toilet Partitions? 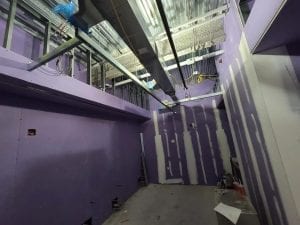 If you’re someone who’s looking to install toilet partitions, there’s a good chance you’ll soon run into the question, “What is Unistrut?” Do I need Unistrut installers? If you don’t foreknow, you could be landing yourself in a rut while in the middle of installing a partition unit.

So, what is a Unistrut system, and how are they used for toilet partitions? The quick answer is, Unistrut is a type of weldless rail system. They are used to bear and displace weight loads easily when used to hold ceiling-mounted toilet partitions in place.

History of the Unistrut Framing System

Back in the 1920s, a man by the name of Charles Atwood invented a rail system that was then called an Atwood System of Frame Construction. His business at the time was called Deceleco Inc.

Originally, this system was designed to support electrical components within large electrical cabinets.  Over time, the Atwood System began to be used for various projects surpassing its initial purpose.

Unistrut changed hands back in 1995 after being acquired by Tyco, who later sold the company to Atkore International back in 2010. They are running strong to this day and continue making their product in the U.S.A.

Not Just a Product, but a Term

Unistrut had become popular enough that many businesses replicated the railing system, all of which are referred to as Unistrut. Unistrut isn’t only a brand name. It is also what people refer to the rails as- whether the manufacturer is Unistrut or not. In other words, it’s become a generic term used by those in the industry for any similar type of rail system.

What is a Unistrut System?

Unistrut Systems are a rather simple design, which is why it became such a popular product.

If you were to take a Unistrut System apart and have a look at one of its rails, what you’d see is a square piece of tubing with a groove running down its length- effectively making it a channel. On either edge of that groove is a small flange (maybe about ¼” or less) bent inward and chamfered down the length of the external surface of the flange.

Next, you’d notice that the nuts being used are made specifically for this system. The nut’s body is shaped like an oval. It’s designed to fit through the groove’s width and then hold itself inside the rail after being spun 90 degrees.

The Unistrut nut body’s surface has grooves that correspond with the chamfered flanges mentioned above. The flange seats within the nut’s groove, creating a clamping effect that keeps the nut stationary and rigid after having bracketry bolted to it.

The idea is that the groove running down the rail makes it easy to slide a nut into a desired position on the rail. This makes it much easier to locate holes or align assemblies. It is 100% more versatile than measuring out and drilling holes into a piece of extrusion- which is the only other option.

This design has proven to be useful in countless situations. Because the systems are bolted together rather than being welded, they can be reused if or when desired. They are also handy because you can add more items down the slot’s length if you wish should a need arise.

Another benefit to Unistrut is that it is easily broken down. This is advantageous for mobile applications or any circumstance making it easy for Unistrut installers to relocate a system if necessary.

On the floor to ceiling models, the Unistrut system is only necessary to stabilize the partition unit. All of the weight is pushing down into the floor, so the Unistrut System attached above doesn’t bear any real weight.

However, the ceiling-hung units are a different story. These units are suspended completely off the floor. Holding them up are Unistrut rails overhead, and the wall anchors help keep the partition system stable.

Unistrut is not the only means to hold up a ceiling-mounted unit, though. There are circumstances where someone will install a welded channel assembly to hold the partitions up. However, welded bracketry is often more difficult to work with and is unforgiving if an error made measuring or if some sort of changes has been made.

This is especially true if you are replacing one unit for another. Things may be just different enough to be a hassle with welded bracketry. Unistrut is a much more versatile option in these regards.

If there was a slight miscalculation somewhere, the rails could be adjusted with a turn of the wrench. Suppose you’re replacing one ceiling-hung partition unit for another. In that case, you can accommodate different hole locations by sliding the nut up or down the rail.

Using Unistrut is easier if you’re installing a toilet partition from scratch or replacing an older unit with a different brand.

Unistrut is Made from Several Different Materials

You might be able to get away with using a steel Unistrut system in restrooms that don’t get very humid or steamy. But you might not want to do the same for, say, a locker room or shower room. When moisture is involved, it’s best to go with something that won’t rust or rot.

You can get Unistrut in stainless steel, aluminum, or hot-dipped galvanized to accommodate all occasions. Hot dipped galvy is supposed to outlast other galvanization forms and will likely be the cheaper of the three moisture-resistant, weight-bearing materials.

Unistrut is easier to work with; you don’t need to know how to weld. It is a long-lasting, reusable product that has proven itself useful on multiple occasions for the last 100 years. It’s no wonder that this is the framing structure of choice by crews everywhere that install ceiling-hung or floor to ceiling toilet partitions.

If you’re looking for a professional team of Unistrut installers, don’t hesitate to reach out.

CSI is a full-service Construction Specialties Installation company. With our knowledge and experience, we are fully equipped to install what you need, when you need it.

CSI is a full service construction specialties installation company which installs a wide variety of specialty products. With our knowledge and experience, we are fully equipped to get you just what you need, when you need it.